The founding of Hampton, New Hampshire’s fire department rightfully belongs to the early twentieth century, with the formation of a beach fire precinct in 1907, a village fire precinct in 1909, and, in 1912, a volunteer company comprised of a chief, captain, lieutenants, clerk, and twenty “members.” These century-old associations, however, were not the town’s first attempts at organized fire protection. That happened over four decades earlier, in 1822, when voters authorized a committee of thirteen persons “to take into consideration the expediency of purchasing a fire engine for the use of the town and organizing a company.” The committee was to report on the costs of an engine and a “suitable building” in which to house it.

The thirteen men were appointed, but what became of their committee and its findings has not been recorded. Some sort of action regarding fire protection must have gone forward, since voters were asked at the 1823 town meeting to choose men to fill the newly-created post of “fireward.” This position, the forerunner of the fire chief, was modeled after that of Portsmouth, whose fire department dates to 1744, and Exeter, which had public and private forms of fire protection since 1774. But Hampton voters, who were getting along just fine with the community bucket brigade, chose to “pass by” that part of the warrant article.

Also in 1823, a group of men organized a fire company in Hampton Falls. According to Warren Brown, who wrote the history of the town, the company—which never fought any fires—was formed solely for the purpose of exempting its members from military duty (up to eighteen men per engine could claim an exemption). This was not unusual at the time, Brown said, as “similar companies were formed in other towns for the same purpose.”

The exemption was still in force in 1833, when a group of fifty-one Hampton men purchased a fire engine from the American Hydraulic Company of Windsor, Vermont. The early 1830s was a relatively peaceful period in which the “Era of Good Feelings” still lingered across the country, and it seems unlikely that these men formed their company for any purpose other than firefighting; rather, they were doing what the town had declined to do a decade earlier, and they asked for permission to erect a building on town land to house their new engine. The 1841 map of Hampton shows the Engine House that the voters allowed the “Owners of the Fire Engine” to build “on the School lot in the Centre District.”

According to historian Joseph Dow, fires were rare in Hampton, and “after a few years, in which little service was required,” the fire company and its engine were abandoned. Afterwards the town kept “several sets of fire-hooks in different localities,” but those, too, were eventually abandoned. Writing the town’s history in the late 1880s, Dow observed that at the time there was no public means of extinguishing fires.

In 1891 the town installed a fireproof safe to protect its public records, some of which were over 250 years old, but voters still refused to concede the necessity of organized fire protection. The success of the bucket brigade in extinguishing and preventing the spread of fires, and watchmen paid to make sure they didn’t break out again, hindered the passage of proposed measures, including the purchase of a chemical wagon in 1900 and the installation of a water system and fire hydrants in 1905. 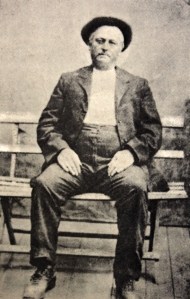 It was a different story at the more densely populated and rapidly growing Hampton Beach, where concerned residents were growing tired of waiting for the town to act. With the State’s permission, they formed their own fire precinct in 1907, under Chief Lemuel C. Ring. Not to be outdone, the town formed its own precinct in 1909 (the two precincts remained separate entities until 2002, when the town assumed responsibility for fire protection at the beach). The town also approved the purchase of a horse-drawn chemical wagon, built by blacksmith Nelson J. Norton, painted by house painter George Johnson, with ladders supplied by farmer J. Austin Johnson and firefighting chemicals by the American Lafrance Engine Company. Three years later, Hampton’s first fire department was organized under Chief Elmer C. King, a forty-year-old piano and cabinet maker originally from Massachusetts, who had married Ella, the daughter of Horace and Elizabeth Hobbs of Hampton.

Carefully balancing the town’s Yankee frugality with a need to grow his department, in his first report, submitted on February 1, 1913, King asked for the funds to build a second wagon, one that his men had volunteered to build themselves, and a house in which to store his anticipated fleet expansion. According to the 1914 town report, he didn’t get his new wagon, but the town did appropriate twelve hundred dollars for the proposed fire house. From then on, expenditures for the Fire Department became a regular line item in the town’s yearly budget.

The lawyers of Penobscot, Maine have petitioned for a fire engine, to be called the “Spouter,” which they propose to man and work themselves.

Originally published in the Hampton Union on May 26, 2017. Images courtesy of the Hampton Historical Society.

History Matters is a monthly column devoted to the history of Hampton and Hampton Beach, New Hampshire. Cheryl Lassiter’s latest book, with co-author Karen Raynes, is “The Queens of Hampton Beach: A History of the Carnival Queens and the Miss Hampton Beach Beauty Pageant, 1915-2015.” Her website is lassitergang.com.

THINGS TO DO THIS SUMMER: GO TO BEACH, GET A TAN, READ AT LEAST ONE OF CHERYL’S BOOKS! Available at amazon.com, and in Hampton at Marelli’s Market and the Tuck Museum.