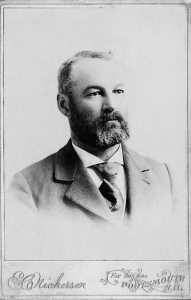 A merchant tailor at the turn of the 20th century said he could tell a man’s profession by the clothes he wore. A doctor’s clothes, he stated, were “generally clean and well preserved” but reeked of iodoform (an antiseptic) and more often than not a small vial of morphine tablets could be found tucked into one of the pockets.

Dr. Marvin Fisher Smith of Hampton no doubt fit the description, although with 200-plus patients, 12-hour-long working days, and a reputation for being “heavy set,” it’s hard to imagine that his clothes were as neat and tidy as the tailor’s observations suggest. During the periodic contagions that scourged the town, Smith was said to have lived in the same clothes for days, getting in his winks while driving his buggy from one house to the next. He was a man of amazing stamina, for whom three horses were not enough to keep up with rounds that could exceed 50 visits a day. How many times he stopped to water his horses at the town pump is anyone’s guess, but surely he must have been its most frequent user. For nearly thirty years, regardless the season, he could be found driving his horse and buggy over the roads of Hampton, delivering $1-a-visit bedside medical services to his patients.

The son of a shoemaker, Smith had been born in Newbury, New Hampshire in 1852, and graduated from Dartmouth Medical College in 1882. Before coming to Hampton in 1888, he doctored in places like Pittsfield and Epsom, perhaps following the migration of shoemakers from the nearby towns of Strafford and Barnstead, who themselves had followed their employers, V.K. & A. H Jones, to the new shoe factory on High Street.

With wife Mary and their two children, Smith took up residence on Beach Road (now Winnacunnet Road) and soon made himself indispensable to the townspeople. It was said that when he fell ill during an outbreak of diphtheria, a fatal gloom descended over the town, as the disease bloomed unchecked without the ministrations of its faithful sawbones. Other physicians carried on Smith’s work, but compared to the doctor who treated even the most baffling diseases with surefire ability, their treatments met with little success.

Smith’s treatments were not always successful, either. In 1890, when a gun exploded in the hand of 12-year-old Valentine Marston, Smith amputated the boy’s arm, but too late to prevent lockjaw from setting in. Valentine died not long after, and, according to legend, his ghost still haunts his childhood home.

In an era before the advent of professional emergency medical services, Dr. Smith was called on to perform first responder duties, sometimes even on himself. In the early summer of 1897 he was called to attempt resuscitation (without success) of a drowned Harvard college student who had been pulled from the water at North Beach. In 1898 he could be found helping victims of the Independence Day cyclone that swept Hampton Beach and killed several people. When he took a spill and broke his arm, he set the bone himself. After a few days’ rest he was back at work.

As coroner, Smith left the world of the living sick to attend to those who had died under strange circumstances. But with forensic science still in its infancy, there was little to do except offer opinions based on what the eyes could see. In 1892 he examined the body of a harmless old man named Josiah Wasson, found washed up on the bank of the Hampton River, and deduced that the man had been murdered by blows to his head. The sheriff and county coroner were called in, an inquest was ordered, but without eye witnesses, the crime remained unsolved.

Smith was not part of the case of Mary A. Marston, the despondent mother of Valentine, who in June 1899 waded fully-clothed into the chilly waters of the Atlantic Ocean to drown herself, but that November he investigated the death of William Cockburn of Hampton Falls, a young shoe factory worker found dead in a boat anchored in the Hampton River. Newspapers reported that Cockburn’s face had been battered and bruised, which, one reporter said, “disturbs the people of Hampton,” who still remembered the unsolved murder of Wasson seven years earlier. That no one knew who owned the boat added to the mystery. Smith’s autopsy revealed that the man had died, not of “foul play,” but of heart failure “resulting from exposure.” His findings only seemed to encourage the mystery-mongers who insisted someone had been with Cockburn and had left him alone to die.

In December 1900 another mysterious death aroused the town. Hunters had stumbled across a badly decomposed body in the swamp near the site of the Hotel Leonia, which had burned to the ground five months earlier. Only the carriage house, what is now the Victoria Inn, was saved. An immediate suspicion of murder hit the newspapers with headlines like “Hampton Excited At First By A Suspicion Of Foul Play.” The body, dressed in a blue overcoat and carrying a silver pocket watch, wore a cap inscribed with the words “basque” and “lassaillette.” Memories were jogged, and someone remembered having seen a “queer”-acting foreign marine hanging around the Leonia months earlier. At the undertaker’s rooms in the village, Dr. Smith examined the remains and found no evidence of foul play, but could not determine the cause of death, either. The man’s identity was never discovered, leaving his family to forever ponder his fate. Perhaps his is the ghost that haunts the Victoria Inn to this day.

Two days later, during the fiercest gale of the season, the Gloucester fishing schooner Mary A. Brown wrecked off Hampton Beach, killing the crew of five. In the early morning darkness of December fifth, as the storm still whipped the sea, the Coast Guard brought the first body from the water. Dr. Smith examined the body, identified as Captain Arthur Aldrich, and ruled the death an accidental drowning. Three days later the bodies of crew members Charles Green and Abraham Pennery were discovered. When the body of a fourth man, Benjamin Johnson, or Benson, washed ashore at Hampton Beach on December 19th, Smith took it to the village to await “disposition by relatives.” The body of the fifth and last fisherman, Thomas Saulnier, was apparently never found. As a news report from the time stated, “all that is left of the little fishing schooner Mary A. Brown of Gloucester is lying on Hampton Beach” (and would remain so for years to come, the subject of photographs, paintings, and postcards).

In 1901 Smith examined the body of a 38-year-old Kensington farmer who had taken a fatal dose of morphine, imbibed through a drugstore patent medicine or given to him by a well-intentioned physician. Although its habit forming properties were well known, with overdose deaths frequently reported, morphine was not illegal at the time, and was even sold in children’s preparations. Smith ruled the farmer’s death accidental. 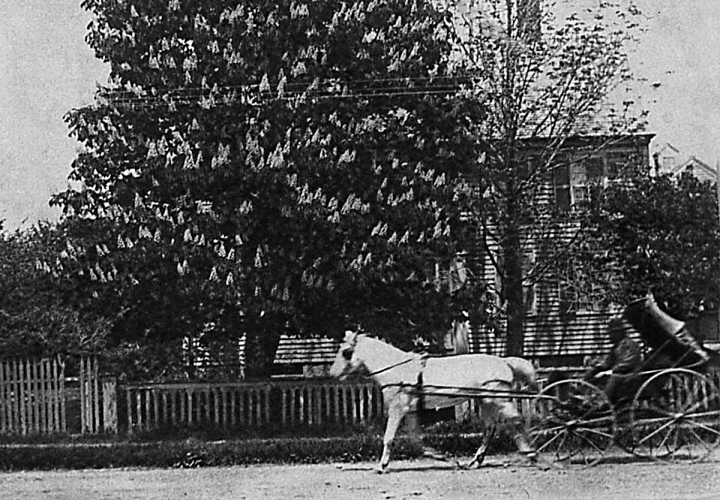 The following spring he was called on to examine the mangled body of another mystery man—this one had been lying on the street railway tracks near the lifesaving station on North Beach when he was run over by a trolley. After viewing the man, who had been found wedged between the rear wheels of the trolley with his brains protruding from the back of his crushed skull, Smith “pronounced him dead.” (A no-brainer if ever there was.)

Smith was one of the first men in Hampton who could afford to put away his horse and buggy and embrace the newest form of transportation, the automobile. Perhaps he had been encouraged to do so by his son, Police Chief Gerald A. Smith, who no doubt saw that his aging father would be safer behind the wheel of a car than holding the reins of a horse frightened by one. Instead of wrangling with indisposed horseflesh, Dr. Smith faced the novel challenges of hand cranking and gear shifting.

Now equipped to go “flivvering” around town at the heady rate of 20 miles per hour, Hampton’s country doctor continued to treat the living and examine the dead until shortly before his death in 1916 at the age of 64.

A History Matters  column published in the Hampton Union, May 6, 2016.

History Matters is a monthly column devoted to the history of Hampton and Hampton Beach. Cheryl Lassiter is the author of five books of local history, including The Queens of Hampton Beach and Marked: The Witchcraft Persecution of Goodwife Unise Cole. Her website is lassitergang.com.