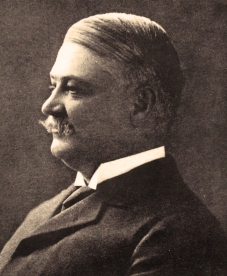 Wallace D. Lovell of Newton, Massachusetts holds a special place in the history of the development of Hampton Beach. Lauded as an ambitious man with “imagination and vision,” he was the driving force behind the construction of the street railway in 1897, the Casino in 1899, and the wooden ‘mile-long’ Hampton River bridge, which opened for traffic on May 14, 1902. The street trolleys brought in the tourists, the Casino entertained them, and the bridge opened up a new vein for travel along the seaboard.

At first Lovell’s trolley system, the Exeter, Hampton and Amesbury Street Railway, did well financially, but in 1907, just one year after his death, it went into receivership and struggled along until 1918 when the New Hampshire Public Service Commission authorized its permanent closure. Concerned townspeople, who used the trolley for commuting to work, school, and shopping, protested the closure. The towns of Hampton, Exeter, and Hampton Falls agreed to buy the line for the sum of $55,000, but at the last minute the latter two backed out. Hampton went at it alone, and, after a somewhat lengthy period of time when those opposed to the purchase tried to stop it, took possession of the railway, paying more than $80,000 for the privilege. That was in 1921. Burdened by high overhead costs and made irrelevant by the popularity and affordability of the automobile, by 1926 the line had shut down and its assets sold for junk.

Lovell was born in Weymouth, Massachusetts in 1854, a descendant of Elder William Brewster of Mayflower fame. By the age of eighteen he was commuting to Boston to clerk at a boot and shoe wholesaler. Temporarily put out of work when the great Boston fire of 1872 destroyed his place of business (along with 775 other buildings), he later found similar work at a boot and shoe store that had survived the conflagration.

By 1880 he was a bookkeeper at a bank and was residing in a Boston rooming house with his new wife Josephine. The country was on an economic Gilded Age tear, and with the exception of his wife’s death, so were Lovell’s fortunes. By 1885 he had gone into partnership as a bond broker with a rather mysterious man named Walter Potter. When Josephine died in 1886, leaving Lovell with three small children, he married the daughter of wealthy Boston merchant Charles Whitten, took up residence in a grand house in Newton, and joined the Hull Yacht Club. The latter half of the 1880s saw the firm of Potter & Lovell aggressively buying and selling private company bonds, making a specialty of the commercial paper of dry goods distributors and footwear manufacturers.

Then came the day in 1890 when calls for redemptions at the brokerage could not be met. In September President Walter Potter and Treasurer Wallace Lovell were arrested and booked on charges of embezzlement and larceny, accused of stealing $70,000 in bonds from a Philadelphia company. They were released on bail, but it was soon discovered that the brokerage was bankrupt. The dominos began to fall. One of the victims was the clothing company of Lovell’s father in law. Eventually, over 120 firms across the country would be affected, and the media would derisively dub the pair of brokers the “Napoleons of finance.”

Lovell goes on the lam

As the investigation into the thefts deepened, Potter and Lovell were brought up on new charges of embezzlement. Potter was again arrested and booked, but Lovell and his family were nowhere to be found.

Years passed without word of Lovell’s whereabouts. His case was all but forgotten with the financial panic of 1893. Then in July 1895 a police inspector inadvertently discovered him living in Mexico. According to the inspector, who was in Mexico on unrelated business, Lovell was living large on a cattle ranch outside the city of Monterey, a known playground for wealthy American businessmen. Some weeks later the assignee for Lovell’s ruined Boston brokerage charged a Chicago firm with having received $500,000 in stolen securities from the Potter & Lovell Company and of carrying them out of Massachusetts. This information came to light when Lovell was in New York City earlier in the year, apparently for the purposes of giving a deposition in exchange for having the charges against him dropped. The way to redemption was paved by his influential father in law, who no doubt wanted to bring his daughter and grandchildren home to Massachusetts.

Now absolved of the embezzlement charges hanging over his head, Lovell returned to his old life in Newton, greatly enriched by his earlier adventures. His shady past was never mentioned again (his obituary in the April 6, 1906 issue of the Street Railway Journal had him politely retiring from business to pass “some time” in Mexico). Lovell became fascinated by the possibilities of interurban rail transportation, recreated himself as an electric railroad promoter, and set his sights on Hampton Beach. The rest is history. 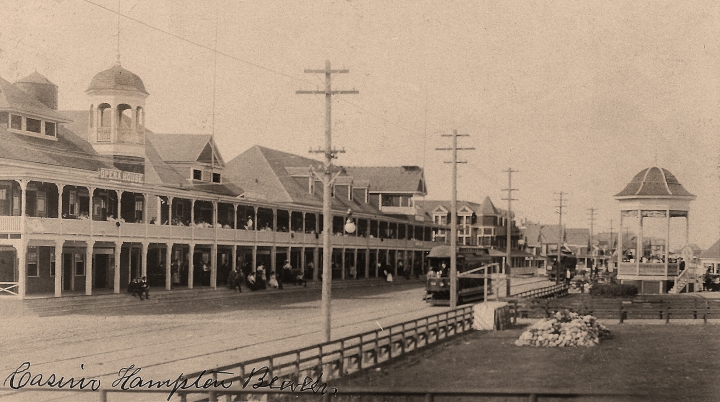 First published in the Hampton Union on September 9, 2016.

History Matters is a monthly column devoted to the history of Hampton and Hampton Beach, New Hampshire. Cheryl Lassiter is the author of several books of local history, including “Marked: The Witchcraft Persecution of Goodwife Unise Cole.” Her website is lassitergang.com.