“I knocked softly at the kitchen door.”

“The successful hobo must be an artist,” wrote Jack London in The Road, a collection of stories about his life as a teenage tramp in the 1890s. London’s “artist” was a man who could spin a convincing tale of misfortune and woe in exchange for a handout at the doors of America’s kitchens. The writer credited his successful career as a novelist to his own tramping artistry, since, if he wanted to eat, he was “compelled to tell tales that rang true.”

In contrast to London’s uncritical, often humorous portrayal of hobo life, Hampton’s historian Joseph Dow had a scathing opinion of the drifters who yearly descended on his town and beach: they “strolled idly from town to town, begging or stealing their support, and often committing deeds of violence and lust. No picnic grove or berry pasture, no secluded road or lonely house was a safe resort for the unprotected.” This annual “trampaign” of vagabonds reached its peak in the summer months and fell off with the coming of winter. As the Portsmouth Herald observed in 1899, “only working men out of jobs or amateurs tramp in the latitude of Portsmouth after Thanksgiving.”

According to Dow, itinerant vagrants began appearing in town around the year 1850, and their ranks swelled after the Civil War. Town reports referred to them somewhat sympathetically as “strangers” and “transient paupers” until 1874, when the word “tramp,” with its connotations of idling and drunkenness, entered the lexicon. The economic panics of 1873, 1884, and 1893 guaranteed the jobless tramp a permanent place in the American scene, and his ne’er-do-well mode of living was caricatured in every newspaper across the country.

In New Hampshire towns like Exeter, Nashua, and Manchester, tramps were lodged overnight in the “bum room” at the city jail. Hampton, however, did not have a dedicated police station until 1900, when the town paid one hundred dollars to erect at the beach a 12’ x 16’ building, with three cells and an officers’ room. To deal with its growing transient population, in 1870 the town established what was facetiously called a “tramp’s retreat.” It seemed like a good idea at the time, but the retreat attracted “hordes of vagabonds,” and in some years taxpayers spent over one hundred dollars for their care and feeding. While the tramps were pleased with the arrangement, the town demanded a cheaper, less inviting alternative.

In 1874 the retreat was shuttered and a second house, “somewhat better than a dog-kennel,” was placed on land leased for ten dollars per year from Simon P. Towle, who lived at 495 Lafayette Road. The town paid $13.50 in materials and labor to S. J. Drake, Joseph Johnson, and John Dearborn to move a shack onto the property and fit it with a stove and funnel. Yet still they came. Over the next decade, Jeremiah Marston, a bachelor who lived on his ancestral homestead at the corner of Winnacunnet and Mill roads, was paid by the town for his “care of tramps,” but it’s unknown whether his efforts were in conjunction with or in addition to the tramp house. Otis Whittier of the Whittier Hotel was also paid to lodge vagabonds, and, in the 1890s, men associated with Hampton’s nascent police force—Abbott Young, Clinton J. Eaton, John I. Dow—took care of the transient population. 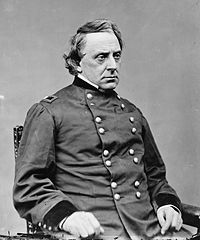 In 1875, New Hampshire enacted legislation to send vagrants to the county jail or town farm for a maximum term of six months, but enforcement ended when “loafers” began filling local facilities to capacity. A better solution was needed, and Exeter lawyer Gilman Marston, a battle-hardened Civil War general, was just the man to provide one.

Born in 1811 in Orford, New Hampshire, Marston had served in the United States House of Representatives before, during, and after his military service. In 1878, as a member of the New Hampshire House of Representatives, he drafted a bill to sentence tramps to a maximum of five years hard labor in the State prison. After exempting women, minors, and blind persons, the bill was passed into law that August.

Dow wrote that the effects of Marston’s law “were immediately apparent throughout the state.” Hampton’s tramp house was shuttered and sold to Otis Whittier for five dollars. In 1879 the town’s annual “trampaign” charges fell to under ten dollars.

The law was so effective that enforcement eventually fell by the wayside, prompting social reformer Frank B. Sanborn of Hampton Falls to caution that if the law wasn’t diligently applied at all times, then “tramps, like other migratory creatures, will again return.” In Hampton, at least, the “wandering willies” were proving Sanborn right. In 1887, Hampton resident Flora Shaw wrote that she would not venture alone into the woods for fear of encountering tramps; in 1894 voters agreed that the selectmen should enforce the tramp law; in 1898 they agreed to study the “possible construction of a tramp house.” Meanwhile, the town was giving aid to hundreds of tramps each year. We can only guess how many hundreds more of London’s artists received handouts at the kitchen doors of Hampton’s housewives.

Tramping by the Numbers

In the decade after the Civil War, the town spent an average of $105 per year on tramp care. From 1875 to 1892, with the second tramp house and Marston’s law deterring itinerant vagrants, the average cost was $18. With the economic depression of 1893, Hampton’s costs for tramp care rose, and did not return to their previous levels until 1905. During the period 1893-1907, when an estimated 1300-1500 transients passed through town, the average cost was $44 per year, with a high in 1898 of $90 and a low in 1905 of $2.25. Again, we can only speculate as to how many men received handouts outside of “official” relief channels.

By 1910 tramp care had been institutionalized at the local and county level. Replacing the traditional system of provisioning by private individuals whose expenses were reimbursed by the town (and the town by the county), police took transients to the station for the night or sent them before the local judge, who might order them to the county jail at Exeter or the county farm at Brentwood. No doubt the artists still made good at the kitchen doors.

Old Lady: Well, here’s ten cents for ye, but I should hate to feel that I was encouragin’ ye to drink.
Tramp: I don’t need no encouragement, mum.

Originally published as a History Matters column in the Hampton Union, April 21, 2017. Images courtesy of the Hampton Historical Society. Image of tramp at the back door from The Road by Jack London, 1907.

History Matters is a monthly column devoted to thehistory of Hampton and Hampton Beach, New Hampshire. Cheryl Lassiter’s latest book is “The Queens of Hampton Beach: A History of the Carnival Queens and the Miss Hampton Beach Beauty Pageant, 1915-2015.” Her website is lassitergang.com.