Of the 221 towns and 13 cities in New Hampshire, only the settlers of the original four—Hampton, Exeter, Portsmouth, and Dover—can claim to have once banned Christmas. For those 17th century Puritans, the holiday was a pagan ritual rife with excesses of merrymaking, drinking, dancing, and binge eating. Like the Pilgrims of Plimoth Plantation, they worked on the day instead.

By 1659, the immigration of Anglicans to New England had become as onerous to the Puritans as the influx of Quakers, so to prevent the disorders “ arising in several places” by their celebration of Christmas, the General Court of Massachusetts declared that anyone found keeping “such festivals” would be fined five shillings for the offense. After several decades of this law “derogatory to His Majesty’s honour,” in 1681 King Charles II forced the General Court to lift the ban. This didn’t matter much in New Hampshire, which had been made a separate colony with its own laws the year before. Instead, in 1682 the King ordered the new colony’s administrators to allow “liberty of conscience,” and to “particularly promote” the rites and rituals of the Church of England. For those who wanted it, Christmas was back on in the colony.

While Puritanism continued to shape the Yankee character well into the 19th century (some say it still does), the belief spread that it was “unchristian” to scorn Christmas. In 1817, an Exeter newspaper observed that denominations other than Episcopalian were warming up to the idea of public religious services on December 25. This was the year Governor William Plumer raised a few eyebrows when he declared that thanksgiving, traditionally a harvest time celebration, would be held on Christmas day that year. By the 1820s, advertisements for Christmas and New Year’s presents began to appear in New Hampshire newspapers, and by mid-century the phrase “Merry Christmas and Happy New Year” was a common holiday greeting. 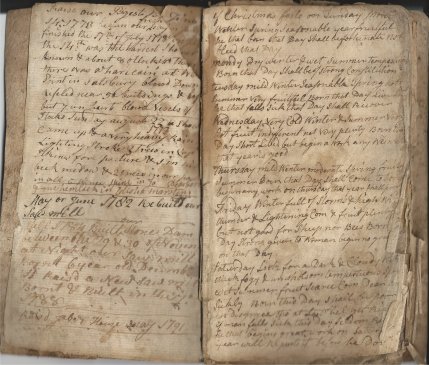 Page from the Lane Family journal. Courtesy of the Hampton Historical Society.

An early reference to Christmas in Hampton comes from the Lane Family journal, now in the archives of the Hampton Historical Society. Drawing from prognostications whose origins date to the Middle Ages, the journal lists the seasonal and natal effects of Christmas for each day of the week. A Monday Christmas portended a dry winter followed by a wet, tempestuous summer, and those born on that day would have a strong constitution. A Sunday Christmas meant a moderate winter and a fruitful year, and luck to those born on that day. A Saturday Christmas meant “a dark and cloudy winter, thick foggy and unwholesome tempestuous spring. The fruit will be scarce, the corn dear and sickly.” Anyone unlucky enough to be born on that day would be “poor in disgrace,” and the chances of recovery from sickness were slim. Christmas on Tuesday yielded the opposite result.

In 1856, our neighbor to the south boldly stepped forward to make Christmas a legal holiday. The holiday fell on Thursday that year, foretelling good things to come, but as Harvard professor Henry Wadsworth Longfellow observed, not everyone was happy with the law. “We are in a transition state about Christmas here in New England,” he wrote that year. “The old Puritan feeling prevents it from being a cheerful hearty holiday; though every year makes it more so.” New Hampshire made his point by waiting until 1899 to declare the holiday, making it one of the last states to do so.

Even as New England warmed to the tradition, the village of Hampton proceeded at its own conservative pace. In 1838 Christmas fell on Wednesday, which portended a very cold winter and a hot summer, with “fruit indifferent, not very plenty.” A person born on that day would be short lived, but projects started on any Wednesday would meet with success, auguring well for Hampton’s First Church, which commemorated its 200th anniversary on Christmas day.

No one knows why the church members chose that day. In his address, Hampton Academy principal Joseph Dow wasn’t particularly helpful to future historians, either, as he did not attribute any uniqueness to the choice of day. Perhaps the significance was so obvious to his audience that it didn’t merit special attention.

Other evidence of Christmas (or not)

In 1843, the year Charles Dickens published A Christmas Carol, December 25th was just another working day for the men who attended the public auction of Simon F. Towle’s estate, which included the mansion that once belonged to General Jonathan Moulton. With a high bid of $330 ($10,000 in today’s dollars), carpenter Jabez Towle took possession of the now-famous house.

Christmas was also a day of work for Charles M. Perkins, who kept a journal of his travels to the California gold fields in 1849 and again in 1857. In his journal entry for December 25, 1850, he notes that he earned $13.65 prospecting gold at Chilly Flat. Further entries show the same pattern of work: December 25, 1857, Blue Gulch. It froze this morning for the 10th time; December 25, 1860, Flintville, prospecting rock for the Merced Falls Mining Company; December 25, 1861, Rum Hollow, looking out for the mill. While Charles faithfully kept the commandment to rest on Sunday, it was pretty clear that he did not celebrate Christmas.

On Christmas day 1862, Lt. Simon Lamprey of Hampton was in Hilton Head, South Carolina with the Third New Hampshire Volunteers. “We had a very fine day here yesterday for Christmas and it was the pleasantest day I ever saw,” he wrote to his brother in Exeter. “But it was very dull, we did not have anything to do except dress parade. Wish you all a Happy New Year.” On Christmas day 1863, he wrote that besides “stirring up the Rebs a little in the morning with shell,” the day was a quiet one for his regiment. That Christmas, as it turned out, would be Simon’s last. He was killed in battle the following August.

Anna May Cole was a First Church member whose letters written from college in the 1880s reveal that Christmas was part of her family’s traditions. “What are the Christmas plans? I must send a note about Xmas to Hattie in this letter,” she wrote to her brother in 1885. “Just think, it is almost Xmas time and I’m not coming home! I’m almost homesick when I think of it,” she wrote in 1886. Two years later she wrote, “My big brother; Merry Xmas, and a week from now, Happy New Year!”

Into the 20th century 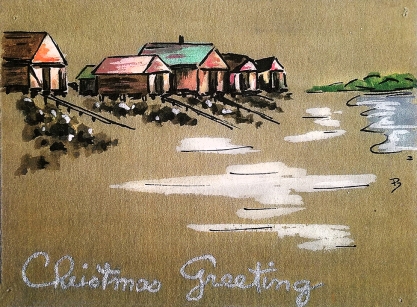 Secular traditions took off in the early decades of the twentieth century, with the first Christmas Seals for tuberculosis issued in 1907 and the first White House holiday greeting, issued by President Calvin Coolidge, in 1927. The Hamptons Union newspaper, established in 1899, published a yearly holiday Souvenir Edition featuring photographs of the town’s leading citizens, along with Christmas advertising (as today, every new gadget was a must-have for holiday gift giving). With a speed that would astound even Santa’s magical reindeer, Christmas became its own season, with sales, clubs, cards, trees, vacations, bazaars, pageants, parties, and plays, in addition to holiday-themed decorations festooning the streets and homes of every town. But family togetherness, forgiveness, and charity were not forgotten, and Christmas became a special time of giving to others. A notable example was Luigi Marelli of Marelli’s Market, who honored the season by sending dozens of Christmas boxes each year to Hampton’s servicemen and women during World War II.

In 1959 the Hampton Chamber of Commerce put on what is likely the first annual Hampton Christmas parade. That year Santa landed at Hampton Beach aboard the Coast Guard’s amphibious duck boat and joined the parade on its High Street route from the Academy to Depot Square. In 1960 Santa came to town on the Fire Department’s new ladder truck, and for an entire week he headquartered at the old railroad station in Depot Square, which that year was named for Luigi Marelli. For a time the parade switched between the High Street-Marelli Square route and one that marched down Lafayette Road to Centre School. As the parade grew in size and popularity, Lafayette Road became the permanent route.

In 1987, for the first time, Hampton taxpayers were asked to help defray the parade expenses, with the funds paid directly to the Chamber of Commerce. Since then, voters have denied their approval only once, in 1990.

From 2004-2006, the name of the parade was changed to “Children’s Christmas Parade.” In 2007, after the death of a child in the 2006 Portsmouth parade caused insurance rates to skyrocket, Hampton’s parade was replaced with a Christmas Carnival, which the voters chose not to fund. In 2010 Experience Hampton brought the parade back to town, and when the taxpayers were asked to contribute $3,000 the following year, they did so by a large margin, voting also to change the name of Holiday Parade to the traditional Christmas Parade.

Hampton celebrates the spirit of Christmas

Once shunned as a pagan ritual, now a beloved religious and secular tradition, Christmas has come a long way on the seacoast. Karen Raynes summed it up perfectly in her 2014 Marelli’s Market memoir. “Hampton,” she wrote, “is still one of those quaint New England towns that as a community comes together to celebrate the spirit of the Christmas season.”

So, to everyone in our quaint little town, may the true meaning of the holiday season fill your heart and home with many blessings. Merry Christmas and Happy New Year!

Originally published in the Hampton Union on December 22, 2017.

History Matters is a monthly column devoted to the history of Hampton and Hampton Beach, New Hampshire. Cheryl’s latest book is “Hampton History Matters,” a collection of new and previously published essays, available at amazon.com and at Marelli’s Market in Hampton. Her website is lassitergang.com.

2 thoughts on “Puritans to Parades – Christmas in Hampton”