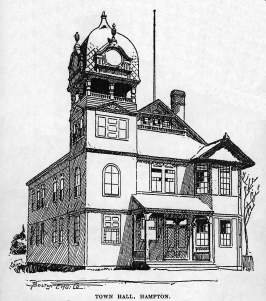 For nearly two centuries, New Hampshire towns had taxed their citizens to support the Congregational ministry. Each town hired its pastor and paid his salary, and it owned and maintained the meeting house where both church services and town meetings were held. A growing revolt by non-Congregationalists and others against this taxation led to the passage in 1819 of the so-called Toleration Act, a contentious amendment to the 1791 law that regulated how towns chose their officers. The new law essentially ended mandatory religious taxation, except to fulfill existing contracts. Anyone who didn’t want to pay the tax could serve notice to the town clerk, and, according to town historian Joseph Dow, the first instance of this in Hampton occurred in 1823, “when some 30 persons refused to be taxed.” Initially feared and despised, the new law acknowledged the growing diversity of religious sects (and their sometimes overly zealous adherents—in 1808, Hampton was the scene of a potato-throwing riot when a Baptist minister showed up to preach), as well as those citizens with no religious affiliation. Instead, religious societies were given the power to raise money by taxing their members.

Long before the Toleration Act was enacted, a disagreement over the choice of minister led to a split between the Presbyterian-inclined town and the Congregationalists who wished to remain independent from an outside presbytery. With the Presbyterians in the majority, the Congregationalists gave up the meeting house and kept church in a private dwelling until 1797, when they built their own meeting house. This turned out to be a good thing in the long run, as it was this structure that would be refitted—some sixty years later—for its new life as the Hampton Town Hall.

In 1808 the factions reunited and hired Josiah Webster as pastor of their combined flocks. They knocked down the old meeting house and made the 1797 meeting house their single house of worship, for which the town paid the Congregationalists four thousand dollars. To make things fair for the Presbyterians, the pews were ordered relinquished and reauctioned.

The town ended its ministerial tax upon Webster’s death in 1838, when the terms of the 1819 Toleration Act barred any further expenditures of public money for religious purposes. In 1840, then, the town divided the parsonage lands and other ministerial assets among the established Congregational, Baptist, and Methodist churches. In 1843 the Congregationalists moved into their new-built church (which still stands in use today), just across the road from their old meeting house.

You own it, you fix it

With the town now solely in charge of the old meeting house, it was voted to pay Edmund W. Toppan $400 for the land on which the meeting house stood. Funds were allotted to deal with petty vandalism, broken windows and the like, and by 1855 the town was wrangling over the cost of repairs to the aging structure and wondering what to do with the privately owned pews, still in place for more than a decade. Five years later, an outside committee was appointed to appraise the pews and determine how much to pay owners for their interest.

As the year 1860 came into being, the long custom of referring to the building as the “Old Congregational Meetinghouse” was dropped in the records in favor of the simpler, secular “town house.” In that year, Jonathan N. Dow presented a resolution to determine the cost of moving the town house to a lot near the new (High Street) cemetery, to repair the building, or, failing approval of the move, to turn the building so that the front faced the road “where it now stands.” The town voted $1,200 to repair and turn the building, to move it to the east side of the lot, and to purchase 20 feet of land on each side of the property. Later that year they voted to buy a new bell (cost $441), to fence the lot, and to insure the building against loss. To accommodate the new, heavier bell, the original steeple was replaced with a belfry.

In 1870 the town voted to add a piece of property to the town house yard, one that had been formerly occupied by the house of Betsy Blake. By 1883 the town house had fallen into such a state of disrepair that the selectmen were directed to examine the structure and determine what repairs were needed, after which $200 was voted to effect the repairs. The following year, however, the issue of repairs was again brought to the voters. This article was indefinitely postponed, the voters approving only the removal of the fence that fronted the town house.

As expected, the postponements did not fix the problem of repairs. In 1885, voters were asked to appropriate a sum of money “sufficient to thoroughly repair the town house and to build an addition on the North end as per plan.” They again voted that the article be indefinitely postponed.

In 1886 the issue of repairs was once more brought before the voters. Committees were appointed, conclusions drawn, and it was decided that a committee should “draw plans and specifications and estimate what it will cost to repair the town house.” The committee’s report must have been sobering, as the town voted to lay the issue “on the table” for one year.

In 1888 the town was asked to appropriate the sum of $3,000 to makeover the town house. With nine very specific requirements, it was resolved to tackle the project in a major way. The requirements called for a two-story tower with a belfry, not less than 12 feet square, at the front of the building, with interior stairs that would give access to the second floor. It was also ordered that the second floor be remodeled, a new hardwood floor laid down, the ceiling replastered, the woodwork painted, and the window frames repaired. The floor of the lower hall was to be leveled, new petitions installed, walls and ceilings replastered and painted, and a chimney “to give a good draft” added. The exterior was to be painted with two coats of paint “in two colors.” The selectmen were authorized to issue town notes for the repairs, with rates of interest not to exceed five per cent.

The contract for the project was to be let to the lowest bidder, who was required to complete the work no later than July 25, 1888. Lawrence, Massachusetts architect George G. Adams was hired to draw the plans for the alterations and Samuel W. Dearborn of Hampton was awarded the construction contract. Things didn’t go quite as planned, and the date of completion was moved to October 30. The delay upset some persons, who wanted contracts annulled and a new town house built from scratch, at a cost of $8,000. Eventually, however, the problems were resolved and the town house was rebuilt to its final appearance—a typical New England structure, but with a strangely squashed, domed bell tower that seems to have been ordered up by a (perhaps deranged) Russian oligarch. Unlike in appearance to Adams’s other known works, it remains one of the most unique public buildings ever erected in New England.

As a natural extension of the meeting house ethos, for nearly 90 years Hampton’s town hall had served as the community’s civic center. In 1861, the town allowed the Winnacunnet Guards, Hampton’s militia company that would soon be heading off to fight in the Civil War, the use of the town house one evening per week. In 1862 the Debating Society, “to aid the volunteers,” was also allowed one free evening per week. In 1871 the town permitted the Hampton Library Association to use the “lockup room” in the town house for a library (with the lockup moving to another room, of course). Also in that year, the voters left to the selectmen the matter of allowing the Adventists to use the town house for religious services (the selectmen apparently said no, as the Adventists soon leased from Simon Towle land on which to erect their church). Schools, churches, and community groups used the hall for their benefits, dramas, and minstrel shows. Movies were shown and dances and concerts held, with music provided by any number of professional and amateur groups. The Superintendent of Schools kept an office in the town hall, and when police courts were established in New Hampshire (1913), a room adjacent to the lockup was provided for that purpose. Before the ratification of the suffrage amendment in 1920, town meetings had been held in the lower hall, but afterwards, with the increase in voters, the meetings were held in the larger upper hall—which is why it was voted in 1924 to build a fire escape and to buy settees for the hall.

Nearly a half-century had passed since the makeover of 1888, and the country was now in the midst of an economic depression. Still, warrants presented at the 1933 town meeting asked voters to approve spending some $20,000 to enlarge and renovate the town hall. The proposed article, as you might guess, was indefinitely postponed. But—to everyone’s credit—in 1935 the town installed a fireproof vault to protect its valuable and historic records (a measure last proposed in 1891).

Fourteen years later, in the frigid, early morning hours of March 19, 1949, a loud explosion jolted the vicinity of the town hall. A roused neighbor, seeing the front doors on the town hall blown open and flames pouring out of the windows, put in a call to the beach fire station (the town station, standing next door to the town hall, wasn’t connected to the “regular telephone system,” nor did its on-duty fireman hear the blast). The 14-degree temperatures hampered efforts to save the 152-year-old landmark, and in the end only the bell tower remained unscathed. The vault had done its job, the records were saved, and with the $10,000 insurance payout, a new town hall was built around the spot where the vault stood. Even with later additions, this structure was not much larger than an average house, but it served as the town offices until 1999, when they were moved to their current location, a concrete and glass fortress built originally as a bank. It’s predecessor stood abandoned until it was demolished in 2011.

In Hampton, the era of the community-centered town house, with its large hall, dining room, and kitchen ably suited for gatherings and entertainments, is long past. Yet a few mementos of the old town hall still exist. The “$80,000” clock—a reminder of the time when the town owned a money-bleeding street railway—resides in the present town offices; the 1861 bell that rang from the deranged oligarch’s tower is now a permanent fixture in the dooryard of the Congregational Church on Winnacunnet Road; and the Hampton Town Hall sign that once hung two stories above the front entrance, rescued from the dump, is on display at the Tuck Museum.