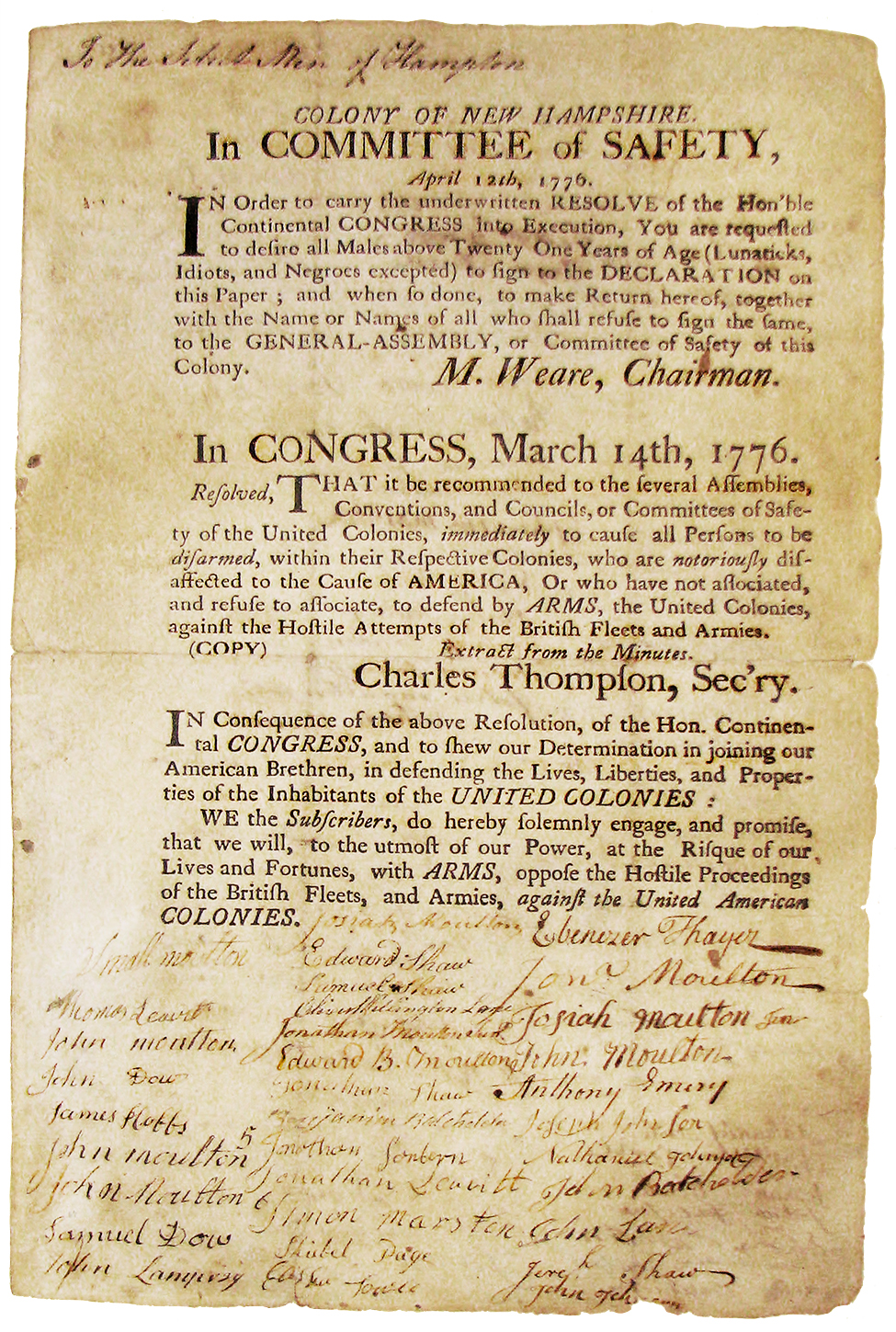 In 1738, while Hampton was exercising its taxing authority upon residents no longer wishing to pay the minister’s portion of the town tax, America’s future egregious taxman, George William Frederick, was born in London. As King George III, he once commented that “everyone who does not agree with me is a traitor,” betraying the flawed and foolish nature that helped spur the American colonies to declare independence from Britain.

Angered by the 1773 Boston Tea Party, King George forced Parliament to enact a series of punitive measures known as the Intolerable Acts. While these acts were aimed mainly at Massachusetts, British intervention in colonial government was seen as a threat to all. In Hampton, as in many communities throughout the country, townsmen gathered at the meeting house to consider the “unseasonable and unconstitutional power and claims which the Parliament of Great Britain have assumed over the rights and properties of His Majesty’s loyal subjects in America.” Later they would send representatives to a convention in Exeter to choose New Hampshire’s delegates to the First Continental Congress, held in Philadelphia in the fall of 1774. That Congress responded to the Intolerable Acts by enacting the Continental Association, which required Americans to boycott British goods and declare their loyalty (or not) to the United Colonies.

A few weeks after the opening salvos at Lexington and Concord, the Hampton men met again, this time to choose delegates to attend the provincial congress held at Exeter in May 1775. They chose Captain Josiah Moulton and Mr. Josiah Moulton, and empowered them to “adopt and pursue such measures as may be judged most expedient to preserve and restore the rights of this and other colonies.” Based on advice from the Exeter meeting, Hampton voted to station a nightly four-man guard at Hampton Beach and to create a thirteen-member Committee of Safety.

In 1776 the Committee of Safety conveyed the Continental Association declaration, or “test,” to the selectmen, who were to see that it was signed by every sane white male in their jurisdiction, twenty-one years and older, and, along with the names of those who refused to sign, return it to the Committee. Hampton’s declaration, dated June 4, 1776, bears the signatures of 174 men (whose names are commemorated on the Bicentennial Park monument at Hampton’s North Beach). Only two men, Captain Jeremiah Marston and Daniel Philbrick, refused to sign.

In late 1775, following royalist Governor John Wentworth’s hasty departure from New Hampshire, the provincial congress at Exeter voted to draft its first constitution. On January 5, 1776, six months before the signing of the Declaration of Independence, the New Hampshire representatives made history by enacting the first independent government in the colonies. Intended as a temporary framework and never submitted to voter approval, the hastily constructed constitution proved to be unpopular with the people of the state. On the Seacoast, Hampton was the only one of the twelve area towns not to formally object to the new form of government.

The provincial lawmakers heard the message loud and clear. In 1778 they called for a second convention, to be held that June in Concord, to draft a permanent form of government. Hampton, which had originally dissented from the proposal, voted to send as their delegates Captain Josiah Moulton and Colonel Jonathan Moulton.

Once again, New Hampshire made history. The Concord convention was the first in history to meet for the sole purpose of framing a constitution, one that would be adopted only if ratified by the people. With only two dissents, Hampton voted to approve this second constitution as written, but the statewide result was a “total rejection of the new-formed constitution.”

In 1781 the state’s third constitutional convention met in Concord, with less than sixty members in attendance. Captain Josiah Moulton again represented Hampton. When the draft constitution was submitted for approval, towns that voted in the negative were asked to suggest amendments. At a meeting held on Christmas Day, Hampton townsmen appointed a committee of leading citizens to examine the convention’s latest effort and report back their findings. After consideration, the committee was not in favor, and as a result the town voted to reject the proposal.

Rather than offer the requested amendments, the town gave three reasons for its rejection. First, although the American victory at Yorktown in October 1781 had effectively ended the fighting, the war had so agitated and disturbed the people that they were unfit at the present time to take “so important a matter under consideration.” Second, they worried that if the form of government should be accepted by so few towns, it would surely cause “great uneasiness in the State.” And third, they were concerned that the western towns that had seceded to Vermont were not represented. While some believed their secession was real and permanent, the men of Hampton felt that those “disaffected” towns would eventually “return to their duty,” and when they did, they would be “justifiably aggrieved” if they had to conform to a government in which they had no voice in framing. As it turned out, Hampton was not alone in its opinions; for similar reasons, voters across the state flatly rejected the constitution.

With the news that a preliminary peace treaty between the United States and Britain had been signed in November 1782, the State decided to try again. In April 1783 the towns had to decide whether to accept the new form of government “as it now stands,” or make recommendations for alterations. As before, Hampton townsmen voted a committee of their best citizens to reexamine the constitution and report their findings. The committee returned with six amendments, which were accepted unanimously by the 76 voters present, but as it turned out, only their recommendation that the chief executive of the state be styled “president” instead of “governor” was implemented at the state level. The other recommended amendments were 1) that the legislative and executive functions be vested in one body, 2) that civil and military officers be appointed by the Senate, 3) that the waiting period for amendments be shortened from seven to three years, and 4) that the wording of the 28th article in the Bill of Rights, which they felt erroneously implied that the power to lay and levy taxes was transferrable, be clarified.

Hampton voters approved the final version of the constitution, which went into effect on June 2, 1784, less than one month after the Treaty of Paris officially ended the War of Independence. Four years later, Christopher Toppan, Hampton’s delegate to the convention to adopt the federal constitution, was privileged to be among the men who cast their “Yeas” in a 57-47 vote—“in the name and behalf of the people of the State of New Hampshire”—thereby making the Constitution the new law of the land.

History Matters is a monthly column devoted to the history of Hampton and Hampton Beach, New Hampshire. “Hampton History Matters,” a collection of new and previously published essays, is available at amazon.com and Marelli’s Market. Contact Cheryl at hamptonwriter@gmail.com or through her website lassitergang.com.