An anecdote passed down in the early 20th century by Reverend Edgar Warren of Hampton, New Hampshire, says that the first horseless carriage to appear on the streets of town was brought in 1878 by Loring Dunbar Shaw, a fireman with the Boston Fire Department and the son of local residents Dearborn and Clarissa Shaw. Loring was an up-and-coming inventor of mechanical devices, having received several patents for an automatic steam relief valve which he licensed to the fire department for use in its horse-drawn fire engines. His patents became the foundation for the Boston-based Shaw Relief Valve Company, formed in 1882. 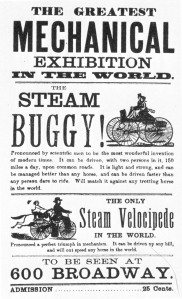 Loring’s interest in motorized vehicles may have been sparked by the pioneering work of Sylvester Roper of Roxbury, Massachusetts, an inventor who had exhibited a steam-propelled carriage and velocipede not far from Shaw’s engine house in South Boston. In any event, a steam carriage was a convenient way for Loring to demonstrate to prospective buyers and investors the effectiveness of his relief valves. He brought his carriage to Hampton by rail, and upon arrival at the depot “curious bystanders” helped him push it to a nearby water pump to fill the boiler. Once the steam was up, Loring started down the beach road “at the dizzy pace of five miles an hour.” He was seen jaunting around town for a few days in his “teapot on wheels,” until the selectmen deemed it a nuisance and ordered it off the road.

The next horseless carriage of note in Hampton was an early Stanley steam car called the Locomobile, driven by its inventor and builder, Freelan O. Stanley of Newton, Massachusetts. As Stanley passed through town in August 1899, en route to the White Mountains to attempt the first-ever motorized ascent of the Mount Washington Carriage Road, he stopped to show off the Locomobile at the Whittier Hotel on Lafayette Road, where local resident Mary Toppan (Clark) photographed the man and his machine. 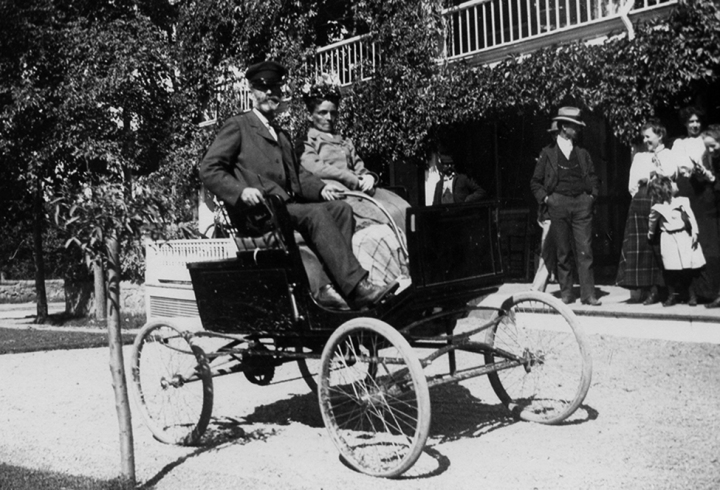 Stanley and his twin brother and business partner Francis had been in the embryonic automobile industry for less than three years. They were better known for their photographic dry plates, which they manufactured through the Stanley Dry Plate Company of Lewiston, Maine. Miss Toppan must have been pleased to make Stanley’s latest invention the subject of her photographer’s lens, perhaps even using plates made by his own company.

In 1904, a quarter century after the selectmen had banned Loring Shaw’s horseless buggy, the town posted its first ever automobile laws to combat the “reckless manner” in which the rapidly proliferating motor vehicles were running over the roads. The speed limit through town was set at 8 miles per hour and vehicles were required to stop when approaching a team of horses that seemed spooked (this was a serious problem, and some New Hampshire towns wisely arranged meet-and-greets at the town square where their horses could acclimate to the noisy contraptions before going under harness). For some years it appeared that the new speed limit law, while not always obeyed, was carefully enforced, with $400 in fines assessed in 1907 alone. But like the tramp laws of an earlier era, enforcement eventually fell by the wayside, and in 1910 and 1912 town meeting voters requested the selectmen to again enforce the speed limit laws.

Before Charles Kettering invented the electric starter in 1911, only a handful of women owned and operated cars. Kettering’s invention helped change all that by eliminating the need to hand crank, making cars much easier to operate. That is unless your car was a Ford, which didn’t begin installing electric starters until 1919. 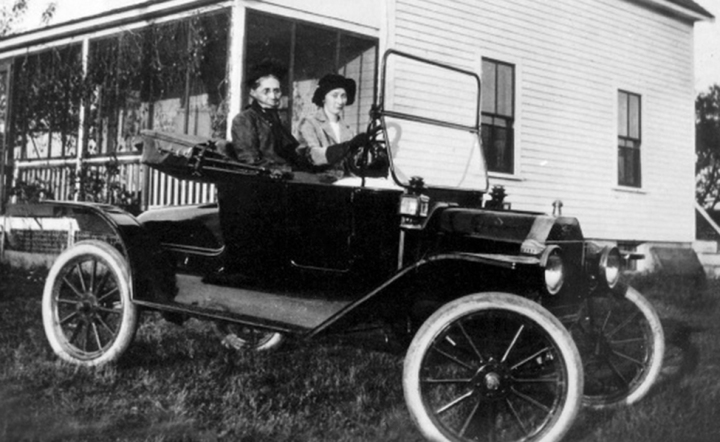 With that in mind, it was at the wheel of a hand cranked Ford Model T Roadster that 26-year-old Bernice Glidden took to the road in 1915, giving her the distinction of being the first woman in Hampton to drive a car. Bernice had been born in Medford, Massachusetts, grew up in Hampton, graduated cum laude from Tufts University in 1910, and worked as a designer in Boston before marrying Charles D. Palmer of Hampton. She was an artist, and a collection of her hand-drawn notecards depicting familiar Hampton scenes is owned by the Hampton Historical Society, of which she was a longtime member.

Get a decent job

Also in 1915—the year the one-millionth Tin Lizzie rolled off Henry Ford’s assembly line—a 24-year-old former chauffeur named Frank E. Brooks opened the Hampton Center Garage, near the train depot, on land purchased from the Boston & Maine Railroad. The garage was one of the earliest service stations in Hampton, and, as Brooks Motor Sales, one of the first Ford dealerships in New England.

To Frank’s parents the horseless carriage was a passing fad, and they had urged him to get a “decent job.” But he knew automobiles were the future of transportation. The following year he expanded to Portsmouth, where, from the barn of his father in law’s residence, he started out as a sub-dealer for pioneering auto dealer and blacksmith Hiram Wever. “Your best friends in those days, if you owned a car, was the blacksmith,” Frank said in a 1966 interview. “They had the mechanical ability to replace broken springs and make other repairs in the days before there were garage service stations.”

Within a year Frank moved his operation to the old Portsmouth Forge building and became a direct dealer of Ford automobiles. At least four brothers and a brother in law found employment in the growing Brooks auto empire, with Frank’s brother John, who served as Hampton’s town moderator from 1937 until his death in 1952, as a sales manager. In 1961 Frank parted with the Hampton Center Garage, which reopened that same year as C&B Ford Village. In 1966 he sold Brooks Motor Sales, which reopened under the name Brady Auto Sales and is today Portsmouth Ford.

In 1900, Hampton’s annual valuation included 270 horses—almost one for every four residents in town. By 1920 the number had dropped to 157, and by 1940, when a car could be found in most driveways, the number of horses had fallen nearly 90 per cent. By mid-century Hampton was truly horseless, with only 4 equines among the resident livestock counted in 1963, the last year they appeared in the records.

“Horseless vehicles may do well for long distance excursions on the road, but it is plain they will never answer for making neigh-borly calls.”

2 thoughts on “Horseless in Hampton”