Born in 1894, Chester Grady’s life spanned the first three-quarters of the 20th century. His prime years were pillared by world wars, shotgunned by economic depression, and energized by a dynamic new culture of music, films, and radio. He was a gifted tenor, a stage and club performer who lived and worked in New York City, Los Angeles, and San Francisco; traveled and studied internationally; and counted among his friends European royalty and Hollywood stars. He achieved minor fame in the early 1920s touring the country with Elsie Janis, a popular musical-comedy entertainer, with whom he remained friends until her death in 1956. His voice received the imprimatur of Ernestine Schumann-Heinke, a well-known German operatic contralto who encouraged him to study for the opera. And he was a psychic medium to boot. 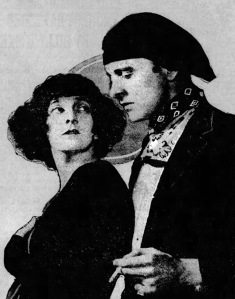 Chester Michael Grady was born in Lakeport, New Hampshire and grew up in Lawrence, Massachusetts, where his mother died in 1903 during a bout of diphtheria that left her young son unscathed. His father remarried and the family eventually grew to eight children, the last born when Chester was 32 years old. In his youth Grady waited tables at Hampton Beach, sang in church, and at age 23 did his first acting stint in a Detroit, Michigan theatre. He performed at venues around the Seacoast and, in winter, St. Petersburg, Florida, often accompanied on the piano by his lifelong friend, John Creighton. After settling permanently in Hampton, he founded the Hampton Players theatrical group, joined the local Kiwanis, and enjoyed antique collecting, crewel embroidery, and cooking. He lectured on extrasensory perception in the Seacoast region, where his reputation was as an authority on the subject.

If anyone should have written their life story, it was Chester Grady. He must have thought so, too, as he said in a 1970 interview that he was working on his memoirs. But when he died two years later, his work-in-progress went missing.

Maude Morey, a wealthy widow from Lowell, Massachusetts who liked to entertain guests at her Hampton Beach cottage, took a shine to the two young musical talents,  Grady and Creighton, and took them under her wing. In 1923 she bought the former High Street residence of Josiah Cate Palmer and converted it to a summer boarding house named Creighmore, a high-toned portmanteau of Creighton and Morey. That winter, while Grady donned a tux and sang for his supper around the Seacoast, he and Creighton got the 22-room house ready for the summer season. Grady purchased a small cottage from the Coast Guard and moved it to the rear of the property as his private sanctuary, which he expanded over the years by adding both new construction and existing structures. The old Little Boar’s Head post office became a dining room, the Creighmore ice house a bedroom. But it was not until his marriage to Rae Cannon in 1947 that he made the patchwork cottage his full-time home. Over the years, Maude conveyed pieces of her property to John and to Rae, who later conveyed them to Grady, so that by the late 1950s he was the sole owner of the Creighmore and its grounds.

A dead man and a flapper

Of all Grady’s interests, the most unusual was his involvement as a trance medium—communicating with the spirits of the dead. He was also interested in psychic research, and to that end joined the American Society for Psychical Research (ASPR) and participated in the psychic investigations of Duke University psychologist Joseph Banks Rhine and Columbia University psychologist Gardner Murphy.

His first published spirit encounter came in the spring of 1930, as he was attending an Easter Sunday service in New York City. While sitting in the balcony of the church, he was visited by a young man who had committed suicide and wanted Grady to tell his mother that he was doing fine in the spirit world. When the spirit showed Grady a vision of his mother, Grady recognized her as a woman who had sat with him a month earlier. Acknowledging his obligation, Grady wrote her a letter to tell her what her son wanted her to know.

His most famous instance of mediumship occurred in New York the following year, when he was contacted weekly throughout the spring and summer by the spirit of Olive Thomas, the original “flapper girl” and Hollywood silent film star who had accidentally ingested poison in a Paris hotel room and died four days later, on September 10, 1920. Fueled by her youth, fame, and the exotic setting of her demise, rumors swirled through the scandal sheets that she had committed suicide over her supposedly dissolute lifestyle and unhappy marriage to Jack Pickford, the younger brother of actress Mary Pickford. Like the young man at the church a year earlier, Olive wanted Grady to contact her mother; not only to reassure her, but to set the story straight about her death.

The story of their contact was told not by Grady, but a year after his death by J. Gay Stevens, a man who said he was present at the sittings and took notes of what the “golden-haired” Olive revealed through Grady. Armed with the intimate information provided by Olive’s spirit, Stevens contacted her mother and convinced the troubled woman of the reality of her daughter’s survival after death. Olive then came to Grady one last time, repeating loudly in his inner ear, “We did it! Now she knows the truth and she’s free. And thanks to you two, so am I.”

Beyond the psychological aspect of a man, whose mother had tragically died when he was a child, attracting the spirits of tragically-dead young people reaching out to their still-living mothers, the fact is that Grady believed in his psychic abilities, even listing himself in Hartmann’s Directory of Psychic Science as a “Trance Medium.” And then there’s this interesting intersection of facts: in 1942—the year he cited the ASPR as his employer on his draft registration—Grady revealed to a local newspaper that he was in the employ of the “United States Intelligence Service,” or OSS. It seems far-fetched to suppose he had been involved in some sort of early Stargate Project, attempting to use his psychic talent to sniff out Nazi spies or break German codes, but Grady himself said that he was “at his best in research concerning identification of unseen objects.” Perhaps if another unseen object—the memoir he was writing in the years before his death—ever resurfaces, we might know for sure.

End note: they had me at bacon

For nearly half a century, Marjorie Mills had been a staple personality on the women’s page of the Boston Herald and on WBZ radio. Known as “Dame Boston,” she had interviewed such noted celebrities as Lionel Barrymore and first ladies Grace Coolidge and Jackie Kennedy. Chester Grady, it seems, was one of her local favorites—she had interviewed him on her radio show multiple times and was fond of quoting his witty remarks in her newspaper column. In 1966, when she stowed the typewriter and microphone after a long career in media, he made the guest list at her retirement dinner.

In the spring of 1954, Mills invited Grady and John Creighton onto her radio show to talk about cooking. Dubbed by her the “inspired Comrades in Cuisine,” the foodies shared their recipes for crustless pecan pie and bacon-wrapped chicken, and, in true New England style, they recommended that cooks use grated cheese to punch up their favorite johnnycake recipes. Today we call these vintage dishes “comfort foods,” but in the ‘50s they were just delectable eating. To try them for yourself, no psychic awareness is required, just go online to https://lassitergang.com/comrades-in-cuisine.

5 thoughts on “The unusual life of Chester Grady”